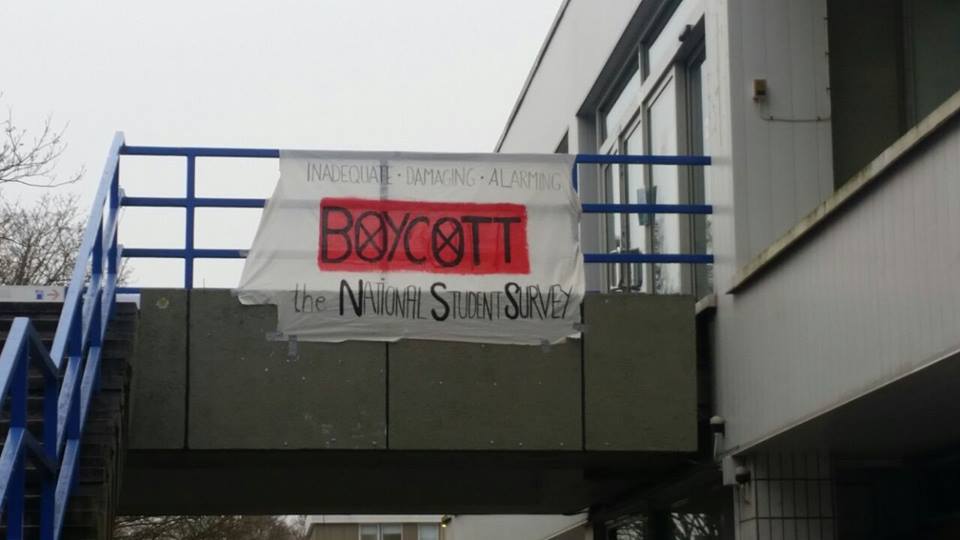 Why Are We Boycotting the National Student Survey?

What is the NSS boycott?

The National Student Survey (NSS) is a questionnaire final-year undergraduate students are encouraged to fill out, ostensibly to measure ‘student satisfaction’ with their course. Following a motion passed at NUS conference last year, students across the country are campaigning to boycott the Survey . This is part of a wider strategy to stop the higher education reforms currently rolling through parliament, by jamming one of the reform’s key mechanisms.

The boycott as a tactic to stop the HE reforms

The Survey itself is a terrible series of metrics for measuring teaching quality – but that’s not the central reason for the boycott strategy. Primarily, the boycott is a tactic being utilised in a wider campaign to stop the government’s higher education reforms.

The whole student movement – along with the largest academic union – is united in opposition to the HE reforms, which are forcing marketisation on the university sector, raising tuition fees, and allowing private providers further access to education provision. They constitute a wide-ranging assault on the principles of free, liberated, critical education.

To stop this legislation in its tracks, we need some leverage. Persuading and lobbying government ministers is a tried and failed strategy; the government is intent in ramming these reforms through, and at the moment we are failing to stop them. As Marco Giugni, a scholar of social movements from the University of Geneva puts it, “the power to disrupt the institutions and, more generally, the society is the principal resource that social movements have at their disposal to produce a political impact”. We need to rebalance the power asymmetry facing us by mobilising large numbers of students in an attempt to jam the mechanisms that are essential to the reform’s smooth functioning.

Why boycotting the NSS will give us leverage

The scores of the NSS are an integral part of the system of marketisation, metrics and magic tricks being imposed on higher education. They will be directly related to the right of universities to raise tuition fees (as the scores contribute to universities’ ranking in the Teaching Excellence Framework [TEF], and institutions which rank highly on the TEF will have the right to raise fees).

The NSS can only work if the data it produces has some credibility. Ipsos MORI, the company which runs the Survey, usually refuses to use data from universities which fail to get 50% of their students to fill out the Survey over a number of years. If we can drive down participation in the Survey below 50% (this may take a sustained boycott over two or more years) then the data will be officially junk, unable to be used. Achieving this doesn’t require uniform engagement with the boycott by all students and all unions; the level of participation required for tactical success is well within the abilities of the NUS and NCAFC to achieve. UCU, the largest academic union, is also in favour of the tactic, opening up copious opportunities for effective student-staff solidarity.

If we can wreck the Survey’s data, it will have a number of effects, including rendering one of the prime measures used in calculating the TEF (a central part of the marketisation of higher education) useless, harming the government’s efforts to impose competition on the sector. It will also incentivise those universities with strong boycott campaigns on campus to pressure the government to enter into negotiations with the student movement. Universities where less than 50% of students fill in the Survey may be unable to raise tuition fees, giving them a strong financial interest in a seeing a settlement between students and government.

Crucially, the NSS boycott is not a panacea, a one-off golden bullet aimed at the heart of the HE reforms. It will probably have to be performed over a number of years, and will have to be combined with a range of other tactics, from a local to a national level: information events, national demos, direct action and more. But the NSS boycott is a tactical innovation with real potential for our struggle.

Want to find out more? Attend our ‘Boycott the NSS Forum‘ on Wednesday February 22.

A version of this article was first published on the National Campaign Against Fees and Cuts website.

One thought on “Why Are We Boycotting the National Student Survey?”