The National Union of Students, after an extensive consultation with activist groups and students’ unions across the country, has announced a campaign to boycott the National Student Survey (NSS) this academic year. One of the primary groups leading the charge for a boycott is the National Campaign Against Fees and Cuts, to which we recently voted to formally affiliate with.

The National Student Survey is a questionnaire that students in the final year of their undergraduate degrees are encouraged to fill out. The call to boycott the survey is based on two calculations:

We will be pushing hard to get students to boycott the NSS this year. The university will be pushing students not to; students will be bribed with money on their Eating at Warwick cards, pizza parties and the chance of winning iPads. Such short term rewards will pale in comparison to the savage impacts these higher education reforms will have on our society have if they go through.

This fight will be a long one. Nationally, right-wing sabbs are trying a bureaucratic manoeuvre to sabotage the campaign before it begins, pushing for a ballot on a lengthy and pointless ‘risk assessment’ of the boycott. Overcoming such obstacles will take effort, organisation, and unity: as does any significant and worthwhile campaign. The struggle continues!

Join WFFE! See our Facebook group and page, and get in touch over FB message if you want to meet any of us.

We have taken the decision to make an extraordinary intervention in the current Students’ Union autumn elections that are taking place this week. We did so because, as a group that operates outside the SU – we are not technically a society – we have more leeway than others to speak out.

A second-year student, Jack Hadfield, is running for the SU’s Development Executive. Hadfield – a genuine Men’s Rights Activist with links to a far-right American trend sometimes called the ‘Alt-Right’ – has, in our opinion, views so poisonous that their exposure is overwhelmingly in the student interest. The Development Executive will have the power to decide which societies get funding from the SU, including liberation societies like Anti-Racism and Anti-Sexism. We have no candidates running in this election.

The Trump-supporting, UKIP-member Hadfield, who describes Hillary Clinton as a “fucking bitch” and thinks feminism is a “cancer”, is a radically right-wing ideologue. When George Lawlor published his infamous Tab article on consent workshops, Hadfield came out in public support, saying that he would no longer be making advances on women at SU events because: “It’s just not worth the risk of jail time, expulsion, and a permanent blot on my life because some batty, vindictive, or remorseful person decides the next day that maybe she wasn’t really into it after all.” He denounced the “new obsession with affirmative, ongoing consent perpetuated by wacky third-wave feminists [that] is scaring a whole generation of young men.”

His comments took the level of ideological opposition to feminist and anti-rape activity on campus to a level Lawlor could only dream of, tapping into classic Men’s Rights Activist discourses of “modern feminism” attacking “aggrieved young men”.

When a horrific racist slur was scrawled on the food of a black woman in Warwick’s accommodation, Hadfield’s immediate reaction was to take to Twitter to claim it was likely a hoax. The Tweets have since been deleted.

He writes for the Donald Trump-supporting blog, Breitbart. The site has become a hive of fringe conservatives hurling bile at feminists, progressives, student activists, and just about anyone not in the classic white-Western-male image. Milo Yiannopoulos, a leading spokesperson for the alt-right whom Hadfield admires, is an editor at Breitbart. Yiannopoulos has compared rape culture to Harry Potter, calling both “fantasy”.

On the site, Hadfield wrote an article called “Campus Crazies”, in which he scoured the internet looking for Tweets and posts from students’ union women’s officers across the country.

He gunned for Ananna Zaman, then a women’s officer at the University of York. In a barrage of misogyny that would have made Eminem proud, he stated: “Far be it for me to revisit tired clichés about the typical BMI [body mass index] of angry campus feminists, but observers will make up their own minds about why Ms. Zaman is so cross all the time.” Not satisfied with his handiwork, Hadfield goes on: “I mean, if this were Tinder and she showed up in the bar, you’d ask for your money back wouldn’t you? Zaman is all about ‘body positivity,’ according to other York students, despite apparently being ashamed of her own.” The linking of feminist views to a woman’s weight is a tired trope of those committed to undermining the fight for gender equality.

At one point in the article, when huffing over the practice of individuals explicitly stating their gender pronouns (to take into account the fact that one’s gender isn’t determined by one’s appearance or biological characteristics), Hadfield asked: “I wonder what would happen if a ‘self-identifying woman’ who used male pronouns tried to join…”. Last year, he attempted to find an answer, filing a candidacy for Women’s Officer at Warwick SU by fraudulently self-defining as a woman, a crude attempt to ridicule modern gender politics. He was barred from entry only because he missed the deadline.

Hadfield’s Twitter feed is a fitting place to keep up to date with the new face of online far-right extremism, re-posting Tweets such as this: “Coming out as a conservative will get you prosecuted more in today’s society than coming out as almost anything else #NationalComingOutDay”, a hijacking of an LGBTUA+ rights hashtag. The absurdity of such a statement – when we have a Conservative majority government, a majority of our national newspapers support the Conservatives, and one of the most conservative candidates in recent US history is fighting for the White House – is apparently lost on him.

There is little hint of his politics in Hadfield’s manifesto for the election. His only policy proposal seems to be to “ensure that money from your Student’s [sic] Union goes towards policies and proposals that ordinary students want”. What “ordinary students” wants is not specified, although presumably Hadfield doesn’t think it includes funding for anti-racism, anti-sexism, LGBTUA+ rights work, or any other form of liberation campaigning.

There is a danger that small, little-known polls such as these Autumn Elections will allow some on the fringe-right to get a foothold in the SU. We write this in an attempt to stop this from happening. We recommend a RON (reopen nominations) vote before Hadfield, which is the best strategy for ensuring that he doesn’t get elected under the SU’s voting system. You can vote here.

UPDATE (19/10/2016): We have been passed further evidence of Hadfield’s fascist inclinations. In one status posted shortly after the racist incident in a Warwick accommodation block (see above), Hadfield mocked the outrage being expressed by hundreds of Warwick students and people across the country, arguing that “we shouldn’t get our knickers in a twist about this”. He then proceeded to plumb the depths of conspiracy theory, claiming that, “the n-word is spelt incorrectly for a racist incident” – whatever that means. He argued that innocuous features of the incident suggested it was “viral ready”, and then questioned why the victim of the slur had posted photos on social media rather than alerting the University, calling the action “suspect”. This kind of reaction to a clear episode of racism suggests a man either deluded or intensely dedicated to discrediting evidence of racism in our society, even when it is right before his eyes. 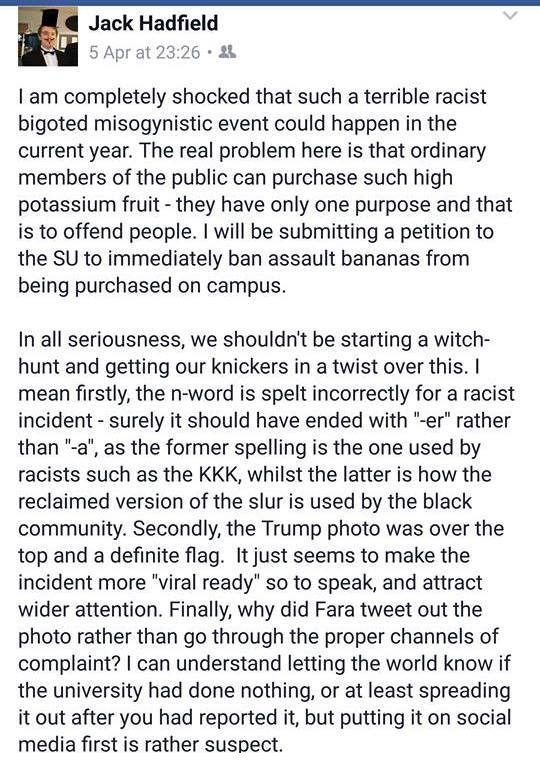 Even more worryingly, Hadfield has ‘liked’ several shocking posts on Facebook. In one instance, a Trump supporter by the name of Andreas Hardie posts a Daily Mail article entitled “Why are modern women so aggressive?”. Andreas responds: “Because men aren’t allowed to slap their uppity little asses down.” Hadfield ‘liked’ the post. 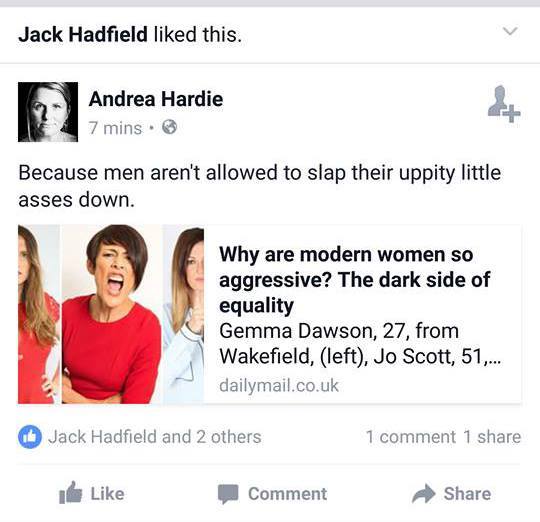 Hadfield has also liked the page “fascist goy for tolerance and understanding”. The page’s profile picture is an image of Mussolini wearing a Donald Trump hat, and the page’s posts are cocktail of racism, rape jokes and misogyny (and that’s just from a cursory look at the posts from last week). The page once posted a Daily Mail article entitled “Mobs of ‘hundreds’ of masked men beat up refugee children in Stockholm” with the comment: “My day just became great”. Hundreds have ‘liked’ the post, including Hadfield. Others put a heart on the post, or a laughing emoji. 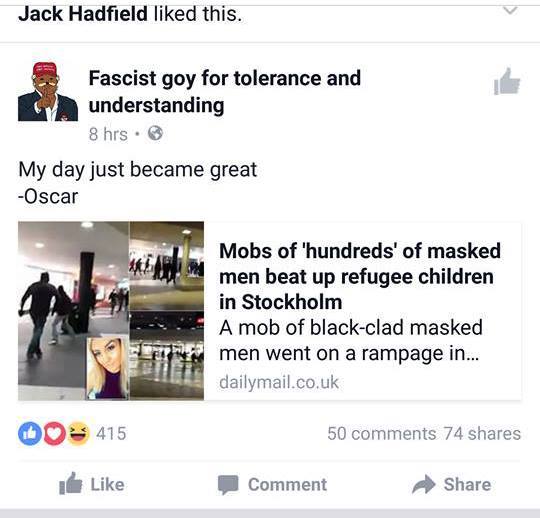 On Facebook, we described Hadfield as having “disdain for minorities and oppressed groups”. He called our words “completely untrue”. There can now be little doubt that our words were 100% correct.

Voting ends Thursday. Vote here, and vote RON [re-open nominations] after any other candidates you vote for, and put nothing next to Jack Hadfield’s name.